We have pups that are a cross between an America Bulldog and a Louisiana Catahoula. Read article below about the origins of this mixed breed. This is the Dam and Sire of the pups. 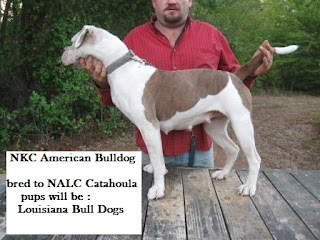 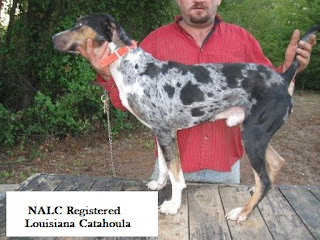 Posted by Westbrook at 10:33 AM No comments:


FOR THOSE WHO SEE AND FALL IN LOVE WITH A "CATAHOULA BULLDOG": These same individuals often will want to know, "What constitutes a "Catahoula Bulldog"? In short, a Catahoula Bulldog is a cross of two high quality breeds – one being an ARF Registered Catahoula [Order Tom D. Stodghill’s book: "History Of Catahoula Leopard Cowdogs", $20.00, post paid.], and the other being an ARF Registered American Bulldog [Order Dave Putnam’s book: "The Working American Bulldog", $55.95, post paid.].


In 1968, ARF welcomed Mr. Bart Perry, of Midlothian, Texas, as the first ARF Certified Breeder of "CATAHOULA BULLDOGS". Six years prior, Bart had been active in the raising of "American Bulldogs", and had decided to expand into the "Catahoula" line.


The ‘Catahoula Bulldog" was bred for two reasons. First, ranchers and hog-hunters have used "Catahoulas" for many years to herd cattle and hunt hogs, but, to catch hogs, they had to carry a "catch-dog" with them. It seemed that most "Catahoulas" were neither big enough, nor tough enough, to catch. The "American Bulldog" has an impeccable reputation as a catch-dog. Therefore, when the "American Bulldog" is crossed with a "Catahoula", you get a bigger, tougher dog which will work cattle and also catch hogs when needed. The second reason is that the "Catahoula Bulldog" is an excellent bear dog because it has the size and aggressiveness of the "American Bulldog", and the intelligence and hunting ability of the "Catahoula".

Did you ever hear that proverbial expression, "Always get acquainted with your dog"? Spend the first week of the dog’s education by just feeding, petting, and walking with him. You need to get acquainted with him as much as he needs to get acquainted with you. Most animals are part of a "pack order" psychological system. In the wolf family, order is enforced by the pack leader, and he usually is the strongest and fiercest male who has the ability to subdue any rival in battle, whether a wild dog pack, wild hogs, deer herds, etc. This strong instinct to be a leader, and, also, an equally strong instinct for submissive behavior is what a trainer exploits, to the best of his ability, in his dog. Keep in mind, even well-trained dogs can revert to their wild nature, and this is why it is an unwritten law of the range never to let your dog roam. If you do, never complain if he gets shot.


The "Catahoula Bulldog" is a rugged canine, full of life and independence. He will sacrifice all for his ability to work the ranging lands where herds and wild animals roam. His instincts are razor sharp, and his intelligence makes him a top working dog, and one of the best personal protection dogs one could want.


The "Catahoula Bulldog" is recognized as a 50-50 first generation cross between the ‘Catahoula" and the "American Bulldog", and up to a 75-25 cross in succeeding generations. It is desirable to keep the cross within the 75-25 limit in order not to lose the basic characteristics of these two fine breeds.
Posted by Westbrook at 10:30 AM No comments: 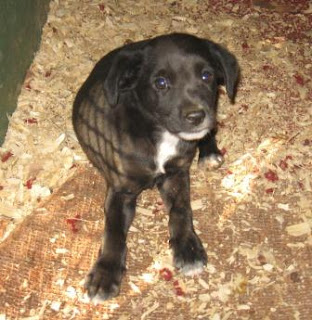 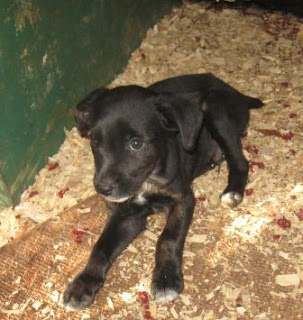 ﻿﻿﻿﻿﻿
Pups are 6-8 weeks old and has had their first shot. They are available now. You can see pedigree on our website on the " Our Mountain Feist" tab. Check back often for updates. if interested give us a call or shoot us a note. Deposits can now be made via our PayPal.
Posted by Westbrook at 3:40 PM No comments:

Westbrook
I have been hunting with dogs for 25 years now. I love the thrill of the hunt and the challenge of training the dog. I pride myself in preserving the natural hunt in the dog.